The test code is purposely compact and doesn’t contain any details about DuckDuckGo’s site. That’s because all of that layout logic is encompassed in a DuckDuckGo Page Object Model class. This makes the tests more maintainable in case the layout of the site changes in the future. It also allows other tests in other test classes to reuse the same page object model, with no need for duplication.

We use @BeforeSuite annotation to initialize the WebDriver since it’s only going to be executed once before the test suite is run. We use @BeforeTest annotation to reset DuckDuckGo to its default state before every test so a test isn’t influenced by results from the previous test. TestNG DataProviders are used to setup the search terms and expected domains in the result page.

To make the tests as small as possible and to decouple the physical layout of the web page from the test, we created a DuckDuckGo Page Object Model (DuckDuckGoPOM.java) that models the behaviors that we need for our test. Specifically:

Visual Studio Code has built in support for JUnit and TestNG tests. A new standalone Java project was created (named “Project1”) and all the Selenium jars were added as well as TestNG to support writing and running tests. TestNG jars were downloaded from Maven’s central repository for TestNG.

Running the tests through Visual Studio Code was done from the Testing tab (first arrow) which allows us to run all the Selenium tests at once or separately (second arrow) and get a nice report with the results (on the right). 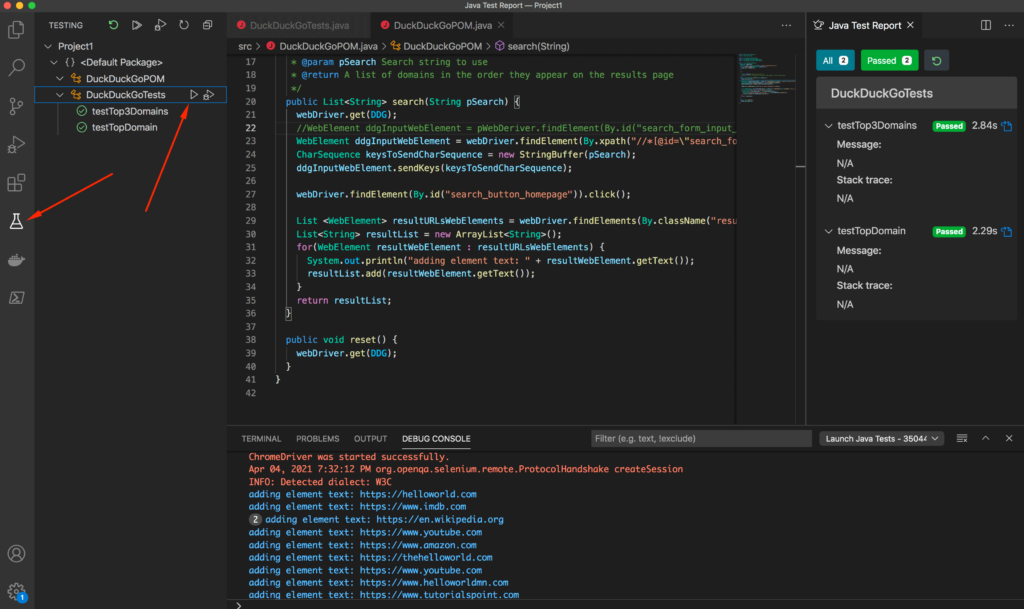