Blockchain and Cryptocurrency in TypeScript

This article presents a custom cryptocurrency blockchain I developed in TypeScript, inspired by the excellent Udemy course Build a Blockchain and a Cryptocurrency from Scratch in JavaScript by David Katz. This article deals with the design and theoretical aspects of a blockchain and cryptocurrency, as well as the technical aspects of setting up the development environment, coding and testing. All code, tests and configuration files are available on Github.

The blockchain implements a cryptocurrency application that allows users to transfer funds between blockchain participants. The video below shows how it works.

This cryptocurrency blockchain has many standard features of popular blockchains like Bitcoin and Ethereum. Many of these features are taken from the original Bitcoin whitepaper:

The following Node modules were used:

TypeScript compiler options were set to be more strict to make the code more type safe. Specifically, the “noImplicitAny” was set to “true” to make the compiler force the use of explicit types throughout the code.

tsconfig.json used for this project:

The compiler target in tsconfig.json was set to “es5”. When I tried to set it to “es6” I had many problems running Jest tests because Node does not support es6 imports and I was getting the runtime error: “SyntaxError: Unexpected token import” when importing a module like this:

So then I tried setting the compile target in tsconfig.json to “es5” but that would result in a compilation error in one of the ws (web sockets) type definition file (web sockets):

So I was stuck and tried to find a solution. I looked at using Babel to transpile from ES6 to ES5 as well as using

I finally found a more simple solution on this Stack Overflow answer that talks about using the “lib” compiler option in tsconfig.json:

which referenced the Angular TypeScript documentation that stated:

This blockchain was thoroughly unit tested using the Jest testing framework. All Jest unit tests are in the Github test folder and are appended with a “.test” to correspond with the file they are testing. For example, transaction.test.ts contains the unit tests for transaction.ts.

Jest needs to be configured to run in Node mode instead of its default “jsdom” or browser mode. The jest section in package.json, is:

Instead of a central trusted authority like a bank, the blockchain network itself acts as the trusted authority because of its built in trust and security features. This eliminates the need for middle men such as banks and doesn’t have a single point of failure. An attacker would have to take over a large segment of a blockchain network in order to compromise it whereas a bank robber only needs to rob a single bank to steal a lot of money.

The fundamental object of the block chain is the block, which represents an individual link in the blockchain. The blockchain stores the following properties:

The code for the Block class is in src/blockchain/block.ts. This snippet shows the above properties:

The code for the genesis block is in src/blockchain/block.ts:

The Blockchain class is responsible for

The code for the blockchain class is in src/blockchain/index.ts. The following code snippet shows the storage of an array of blocks within the Blockchain class, which illustrates that when a new blockchain is created, it comes pre-loaded with a single block – the genesis block:

Since the blockchain needs to be replicated among all nodes in the network, the question arises – what happens if two nodes mine a block at the same time? This is when there’s a fork in the blockchain and the system needs to reconcile the fork and merge all the new blocks. 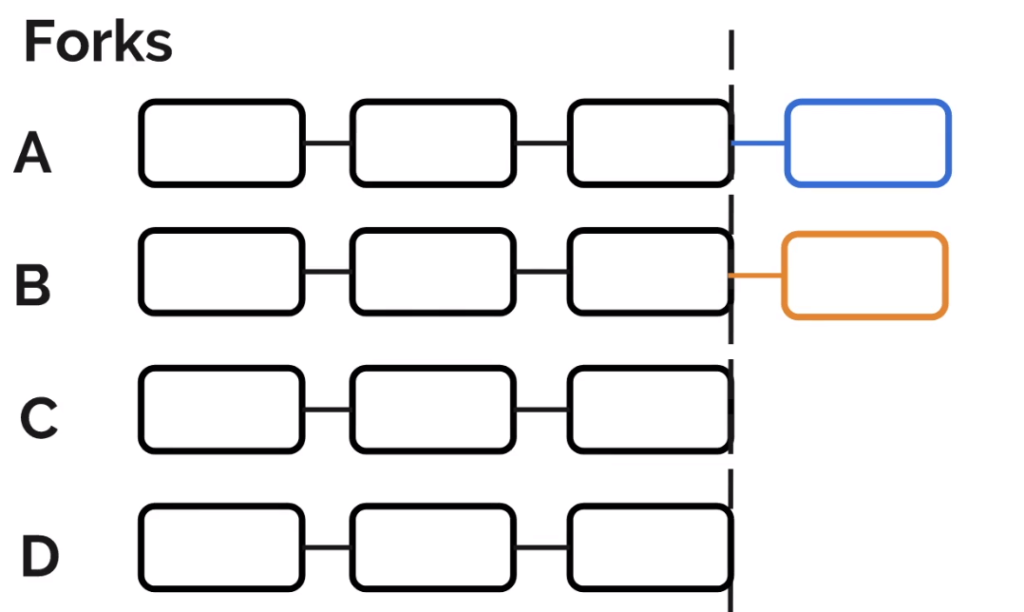 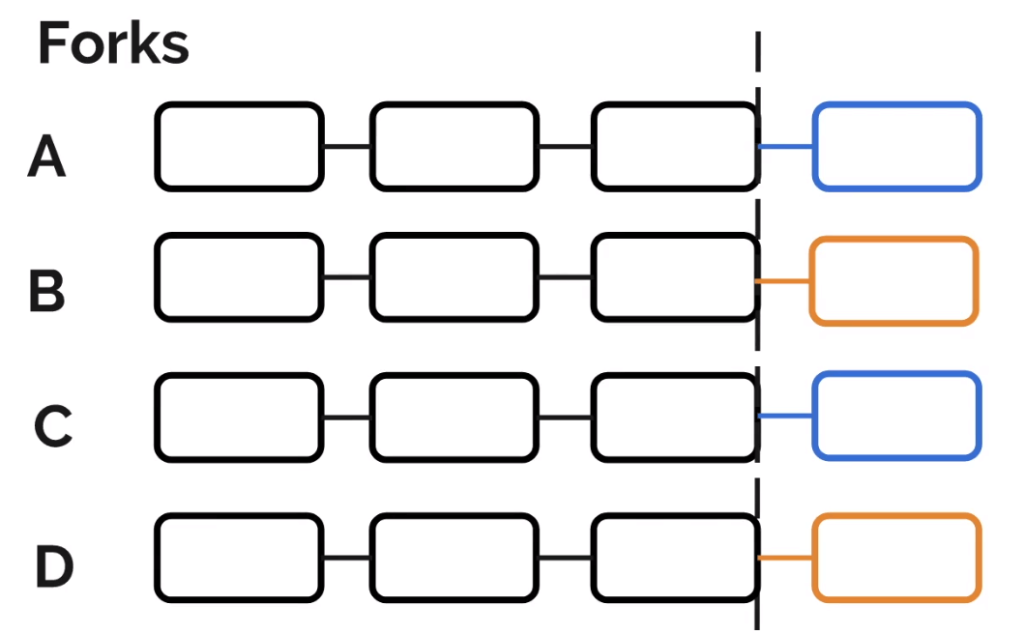 The web application expose a series of JSON endpoints that will allow each node on the network to interact with the blockchain with its own HTTP server:

The code for the web application is in src/app/index.ts:

Each node on the blockchain network needs the ability to communicate with other nodes (peers) on the network in order to:

Each peer-to-peer server uses web sockets instead of HTTP to communicate with each node.

Blockchain synchronization between nodes is done by sending a synchronization message to other nodes as soon as new block is mined on any node. However, before a node replaces its blockchain from an update it received from one of its peers, it needs to check that the updated chain is longer than its current chain and that the new blockchain is valid (by validating its hashes). For new nodes that just join the network, they get an updated version of the blockchain from one of its peers.

The peer-to-peer server is also responsible for synchronizing and clearing the transaction pool between nodes.

The code for the peer-to-peer server is in src/app/p2p-server.ts, which contains the code for blockchain synchronization between nodes:

The peer-to-peer server is also responsible for processing incoming messages from other nodes and determining what to do, based on the message type. There are three message command types:

A blockchain’s uses proof-of-work as a way to ensure only valid blocks are added to a blockchain and to prevent dishonest nodes from adding blocks. Due to the decentralized nature of a blockchain, any node has a copy of the entire blockchain and can theoretically, add another block. Using proof-of-work makes it computationally expensive to add corrupt blocks.

The nonce value is iterated by one on every hash generation attempt. If the hash value satisfies the difficulty level, we save the nonce value in the block so other nodes can quickly validate the hash.

Block mining is implemented in implemented src/blockchain/block.ts. The following code adjusts the difficulty level dynamically and makes use of the nonce when generating hashes for the proof of work.

The wallet class is implemented in src/wallet/index.ts. Here is a snippet that shows the wallet properties and constructor. Note that each wallet starts with a pre-set balance.

Code for the Transaction Input class is in src/wallet/transaction-input.ts:

Code for the Transaction Output class is in src/wallet/transaction-output.ts: 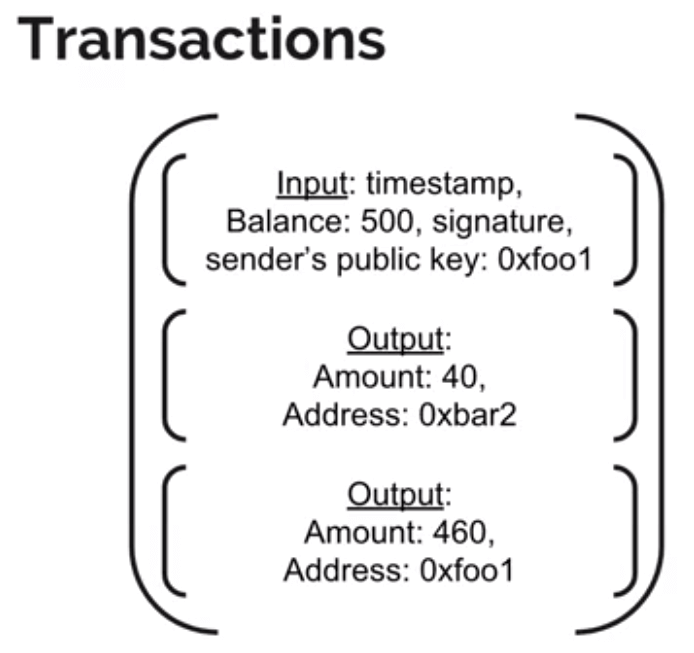 To avoid double counting, the balance of each wallet is re-calculated whenever new blocks are added (mined) to the blockchain. The wallet adds all transfers by other wallets to the node’s wallet (since the last time blocks were mined) and subtracts all transfers from the node’s wallet to other wallets (since the last time blocks were mined). This is much faster than having to recalculate the balance by examining the entire blockchain which would get slower as the blockchain grows. 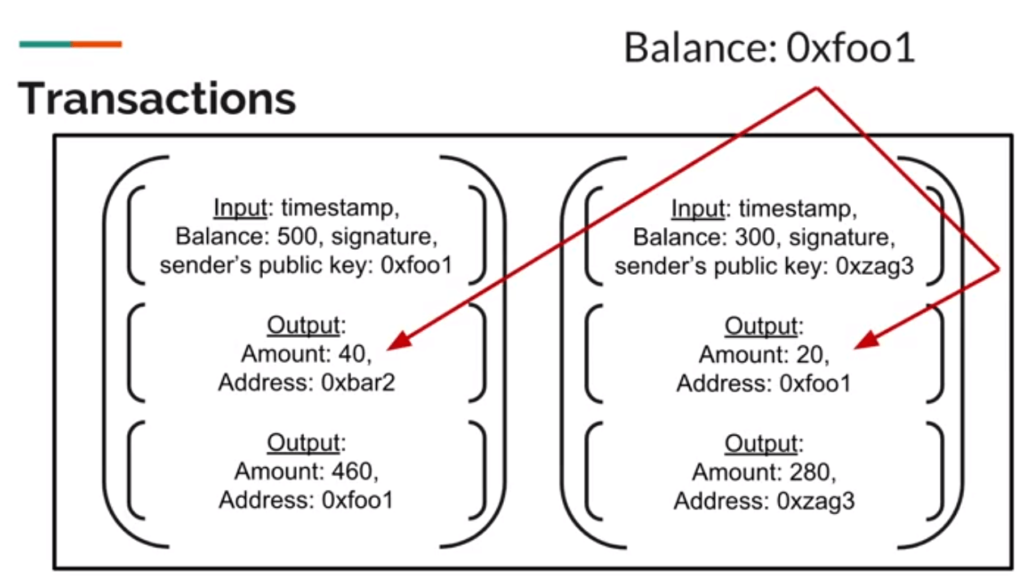 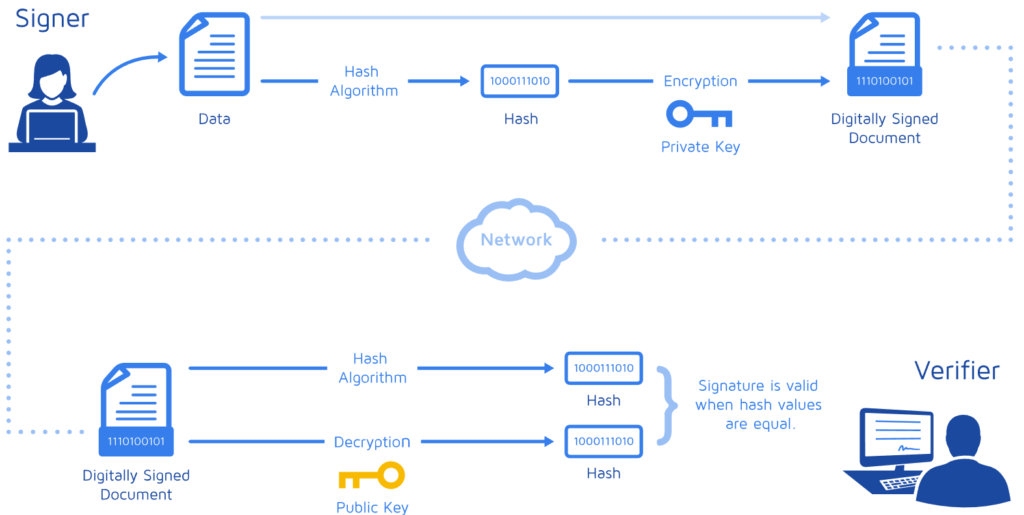 The code for signing and verifying transactions is in src/wallet/transaction.ts:

The code for updating transactions is in src/wallet/transaction.ts:

The Miner class is responsible for:

The Miner class is implemented in src/app/miner.ts:

Miners are rewarded with cryptocurrency from the network by a special blockchain wallet. The blockchain wallet has the ability to send reward transactions to miners without reducing its own balance (unlike regular wallets).

Generating miner reward transactions is implemented in the Transaction class in src/wallet/transaction.ts:

This blockchain is working but is just a prototype. Further enhancements would need to be made in order to really make this blockchain production ready. Nonetheless, it has a lot of the main features of major blockchains like Bitcoin and Ethereum which I tried to summarize and demonstrate.